Spring Statement 2019 and the impact on your business

Despite describing the economy as ‘remarkably robust’, the Chancellor offered a clear warning on the potential impact of a no-deal scenario, which he said would put progress on the public finances ‘at risk’ and cause ‘significant disruption’ to the UK economy. The Chancellor also confirmed that a full Spending Review will conclude alongside the 2019 Autumn Budget. 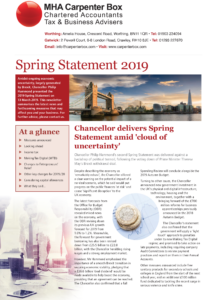 Although the Spring Statement is not intended to be a major fiscal event like the Budget, the Chancellor did announce some new measures:

A number of other key changes are coming into effect during 2019, which may have an impact on your business and personal finances:

The new Making Tax Digital rules take effect from 1 April 2019 where a taxpayer has a ‘prescribed accounting period’ which begins on that date, or otherwise from the first day of a taxpayer’s first prescribed accounting period beginning after 1 April 2019. For some VAT-registered businesses with more complex requirements, the rules will not take effect until 1 October 2019.

In the Spring Statement, the Chancellor confirmed that the focus will be on supporting businesses to transition and the government will therefore not be mandating MTD for any new taxes or businesses in 2020.

The minimum period throughout which certain conditions must be met to qualify for Entrepreneurs’ Relief (ER) is being increased from one year to two years.

If you have any queries about any of the above changes and how it may impact you or your business, please contact the Starbox team on 01903 234094 or hello@starboxaccountants.com